During this 9-day Island hopping of the Aegean Sea, you will have the chance to visit three of the most popular Greek islands: Mykonos with its vibrant nightlife, and signature beach clubs. Naxos with its traditional villages and remote beaches. Santorini, with its breathtaking Caldera, and unique wines.

Upon arrival, your driver will be waiting for you at the airport with a sign with your name on it. You will be transferred to your hotel.

You will meet your specialized state-licensed guide and embark on a historical journey, to Greece’s most famous landmark, the Acropolis, and one of the best museums in the world, the New Acropolis Museum.

A 4-hour tour with an expert state-licensed guide will be more than enough for you to inhale the greatness of this archaeological site. Standing proudly next to the Propylaea lays the Temple of Athena Nike. This shrine was dedicated to the Goddess of Victory and although it is small in size, it is of great importance. Move along to another temple that honored the gods Athena and Poseidon, the Erechtheion. Finally, you will reach the glorious temple of the Acropolis, the Parthenon. The Parthenon was built between 447 and 432 BCE in the Age of Pericles, and it was dedicated to the city’s patron deity Athena.

Your next stop is the New Acropolis Museum with its 3 floors of extraordinary statues, sculptures, and artifacts. Located in the Gallery of the museum, a clay vessel from the Archaic Period, the Loutrophoros-amphora is showcased. Reaching the end of your tour, make sure to take in the breathtaking view of the Acropolis from the museum’s café before you return to your hotel.

The pick-up time for your transfer will be advised at your hotel. Your driver will deliver you to Athens Airport.

Upon arrival, your driver will be awaiting you at the arrival gate with a sign with your name on it, you will be transferred to your hotel.

Free Day at leisure in Mykonos

Famous for the cosmopolitan atmosphere, the exciting nightlife, the picturesque Cycladic architecture and the magnificent beaches Mykonos is a beauty that should not be missed.

Perfect for people of all ages, Mykonos is ideal for long walks along the cobbled streets of Chora, cocktail sunder the beautiful sunset views from little Venice and swims in exotic beaches.

Start the City-and Island tour by exploring the island with a minibus, visiting some of the most famous beaches and the inner landscape. We see fishermen and kaikis, small private chapels, and houses built in typical Cycladic style.

The first stop is in the second main village of Mykonos, Ano Mera, an idyllic place 6km from town, where the guests have enough free time for a stroll around the traditional square and they can visit the monk monastery Panagia Tourliani built in the 16th century. The next stop is Kalafatis beach where there is time to relax a little and have a coffee or a refreshment (not included in the price), before going back to town and to reach a place with a fantastic view all over the town and neighbor islands.

After this walking the small and narrow streets, we have many possibilities to take nice photographs in the early morning, quiet city. We get orientation and information in the labyrinth of the old town as well as impressions of the small port and the Churches in town. Of course, we will see the famous windmills and find Petros the Pelican, the mascot of Mykonos.

The pick up time for your transfer will be advised at your hotel. Your driver will deliver you to Mykonos Port.

Upon arrival, your driver will be awaiting you at the port with a sign with your name on it, you will be transferred to your hotel.

The island of Naxos has a history of over 5000 years, in prehistoric and Neolithic times. Those who would visit the island will find lots of blessings to count: for starters, there are rolling green hills and valleys with clusters of Byzantine churches, medieval towers, and villages with beautiful neoclassical houses. Naxos has the longest accessible coastline among the Cyclades islands, with beautiful sandy beaches and crystal clear waters. Visitors may find well-organized beaches, as well as, more serene and picturesque coasts. It has a number of beaches, such as those at Agia Anna, Agios Prokopios, Alikos, Kastraki, Mikri Vigla, Plaka, and Agios Georgios, most of them are located near Chora. Visitors can also admire the temple of Demeter in Sangri, the giant Kouros statues in Melanes and Apollonas village, the Portara, the Venetian Castle of Chora and the impressive Venetian towers scattered along Naxos Island.

Starting from your hotel we head to the first site for the day. In the fertile plains of western Naxos, between reeds and neatly cultivated plots, lies a temple fittingly dedicated to the goddess of agriculture, the Temple of Demeter. A century older than the Parthenon, this temple has managed to weather two and a half millennia with more than 50% of its original structure preserved carrying invaluable information on ancient architecture.

Moving on we arrive at Halki, a village situated in a fertile plateau, adorned with beautiful neoclassical mansions and home to the second site on our journey; the distillery that first made the –today– iconic liqueur “Kitron”, Vallindas Distillery. We get to know everything about the production (tree, fruit distillation methods)and the consumption (taste tasting) of one of the three PDO liqueurs in the country.

Making our way back south our next stop for the day is in yet another part of the island blessed with fertile soil, Eggares. There, we visit the village’s traditional 19th-century olive press and gain precious insight into practices and a way of life that now belongs to the past/ now long gone. After our in the olive press, time for tasting some olive oil!

Return to Naxos town for a historical walking tour. On the borderline between sea and sun, stands proudly for more than 2500 years the temple of Apollo, a great gate, “the Portara”, on the island of Palatia. As you enter and exit the medieval castle doors, you will learn all about the island’s Venetian and Ottoman past, encounter picturesque churches, the Archaeological Museum, and the Capuchin Convent. Wherever you look at the marble lintels and the coats of arms a strange feeling of awe has hold of you. From the Early Cycladic civilization to the Roman and Byzantine era, the exhibits and the history of the times when created will fill you with enthusiasm.

The pick up time for your transfer will be advised at your hotel. Your driver will deliver you to Mykonos Port.

Upon arrival, your driver will be awaiting you at the port with a sign with your name on it, you will be transferred to your hotel.

The sensational and legendary village of Oia opens its arms to welcome you on a private Volcanic Wine Tasting Experience with the most ravishing views!

Your private luxury transfer will pick you up from your accommodation and drop you off at the scenic village of Oia, located on the northwestern tip of Santorini. Oia is one of the most photographed villages in the world and once you arrive, you will understand why. So, charge your phones, because you’re about to fill them up with a bunch of dazzling pictures of a place that is carved out of Santorini’s cliffs. Along with your private expert guide explore the glamorous center that is full of blue-domed whitewashed churches, exquisite panoramic views of the Caldera, and upscale boutique shops. After the walking portion of your tour, it is time to start your volcanic wine tasting! Your guide will take you to a wine estate where you will learn about the production of superb volcanic wines. The local grape varieties produce high-quality wines that fully express Santorini’s unique ecosystem. An assortment of local savory treats will be served as you sample the finest Santorini wines!

Unfold Santorini’s beauty and history as you embark on the Discover Santorini Tour. The archaeological sites, the volcanic beaches and the tranquil villages are part of a tour that will take you from Ancient Santorini to the medieval era and then to the age of its ascendancy, in the 18th century. This tour will help you relax, leave all else behind and enjoy an unforgettable experience..

You will be picked up with a luxury transfer. The first stop is Akrotiri prehistoric town where you will learn about the advanced ancient civilization. The towns on the caldera are all beautiful, but how about a walkthrough the whitewashed houses and winding streets of a traditional village in a more hidden corner of the island? Your experience will continue to a family owned wine estate for some wine Tasting before heading to the eastern side of the island for a stroll on the black sand beach.

Today, you will have to say goodbye to beautiful Greece. Your driver will pick you up and transfer you to Santorini Airport where you will take the domestic flight back to Athens. Once arriving at Athens Airport, check-in to your international flight and depart Greece. 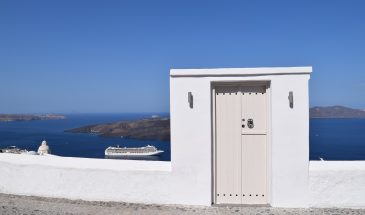