“Medieval” Greece: 5 + 1 beautiful destinations that take us on a journey through time
[:en]Nudist beaches in the Cyclades[:]
[:en]Five Churches in Greece that hide a Special History[:]
Culture

Byzantines and Franks have left their mark in various parts of Greece, creating settlements that still exude an aura of another era. “Medieval” Greece invites us to discover it through 6 wonderful medieval destinations that keep their characteristics intact over time.

To discover these 5+1 Medieval destinations in Greece, contact one of our expert travel designers here or email your request at [email protected] Mesta is the most well-preserved village of Chios. It is one of the most beautiful castle villages on the island. Its location is 35 km southwest of the city of Chios and is a true medieval monument.

The village, which dominates a small valley, was built in Byzantine times. Its shape is pentagonal and quadrilateral. It has winding inner streets, while the houses played the role of a wall, so they had no windows to the outside.

In the village, there are many churches, mainly small, fully integrated into the urban fabric. The largest and most important today is the church of Taxiarches. Taxiarches was built in 1868 on the site of the old circular tower of the castle. Next to it is the central square of the village, the “meadow” as the locals like to call it.

The special element of the village is its architecture, as the houses are next to each other, while they communicate with each other through very narrow, covered streets, the “domes”. Olympi is a medieval mastic village of the 14th century and is located near Pyrgi, on the road to Mesta. It is a protected monument.

The houses of the village connect, and the roads are narrow and paved. In the center of the Olympi rises the defensive tower, a type of Acropolis – 20 meters high – where the inhabitants had as a shelter in case of attack.

The parish church (the “village church”) of Olympi got its name after St. George. The church of Agia Paraskevi with its wood-carved iconostasis is remarkable. Furthermore, another formidable building is the Bank of Olympi. It is two stories with long and narrow halls that are in excellent condition since the Middle Ages. Mystras with the Byzantine fortress balances on the steep hill of Taygetos, which overlooks the laconic plain from above. The deserted state captivates the visitor with its Byzantine churches, its walls, and its stunning views.

The Castle of Mystras was built in 1249 by the Frank Prince William II Villarduino on the east side of Taygetos. Located at the top of a hill one can see its steep and conical shape. The location is strategic, as it controls the entire Evrotas valley.

It is this castle that will be the basis for the development of the castle city. Since 1989, Mystras has been included in the list of UNESCO World Heritage Sites. A small town in the prefecture of Laconia, Monemvasia in the Peloponnese, stands out for its unique history and enchanting aura. They call it “Gibraltar of the East” because one sees it in reduction, it is identical to the rock of Gibraltar.

It stands out for its Castle, which has two settlements and is among the most beautiful sights in the country. If one sees the photos, one immediately understands why.

Two parts divide Monemvasia. The first part is Ano Poli – where there is no population. The second part is Kato Poli which is inhabited today and hosts important attractions. The great Greek poet Giannis Ritsos comes from Monemvasia, whose tomb is located there. 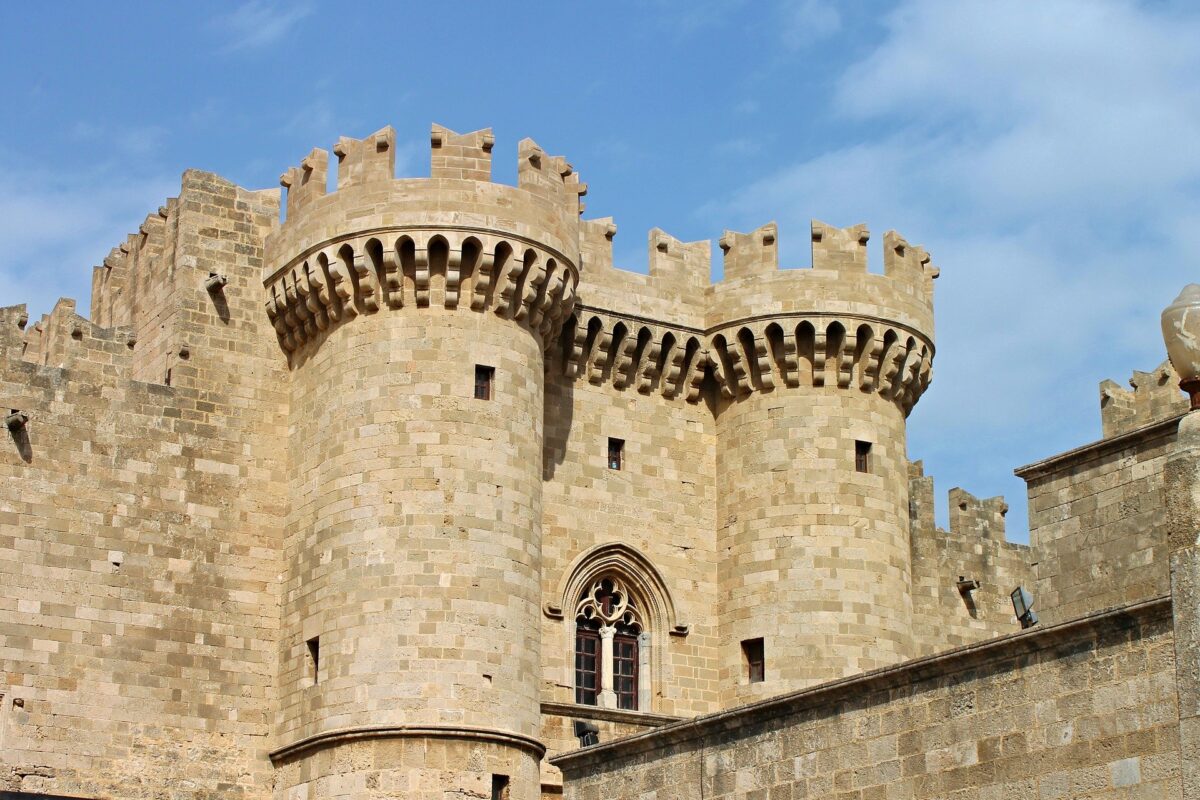 Rhodes is a timeless destination, still popular from the Roman era, where Byzantines, Greeks, Venetians, Italians, and Turks left their mark and created a beautiful medieval city, where in 1988 it was recognized as the City of Pagos.

In its alleys you will find a sample of different architectures from different historical periods, dominating the period of stay on the island of the Order of the Knights of St. John, as well as that of the Ottomans. At a distance of about 10 km from Fira is a village that you must visit. The famous Pyrgos, the old -until 1800- the capital of the island is located inland, at the highest point of Santorini, in Profitis Ilias.

In the center of the Tower is the medieval castle with houses amphitheatrically surrounding it. It combines the characteristics of the era of Venetian rule. With scattered churches, mansions, and village houses, and has been designated a monument. The monastery of Profitis Ilias is one of the oldest churches in Santorini. Finally, in the 10th century they reconstructed the monastery of Profitis Ilias.