Meteora: The Holy Land of the Hikers
[:en]5 Unknown Waterfalls in Greece[:]
[:en]Heraklion Crete: A City that we Love[:]
Mainland Greece

Discover the second-largest monastic complex in Greece through walking routes and unknown paths. The holy land of Meteora is ideal for hiking lovers!

A little bit of Meteora History

With its huge sandstone cliffs and centuries-old monasteries and hermitages, Meteora (which belongs to the list of UNESCO World Heritage Sites) is one of the main tourist attractions, not only in Thessaly but also in the whole of Greece. Furthermore, crowds of tourists arrive to admire the beautiful – and certainly special – landscape. Countless are couples who wander around the courtyards of the monasteries impressed, perhaps even slightly dizzy, by the beauty of the landscape. Moreover, there are groups with colorful headscarves, who come here for religious tourism.

Historically, the first monks probably appeared in Meteora in the 11th century. Over time sporadic monasticism was replaced by organized monasticism. Of the 24 monasteries that were created, today most are in ruins – only six can be visited, the Monasteries of Rousanos, Saint Stephan, Metamorfosis tou Sotiros (Great Meteoron), Holy Trinity, Saint Nicholas Anapauseos and Varlaam. 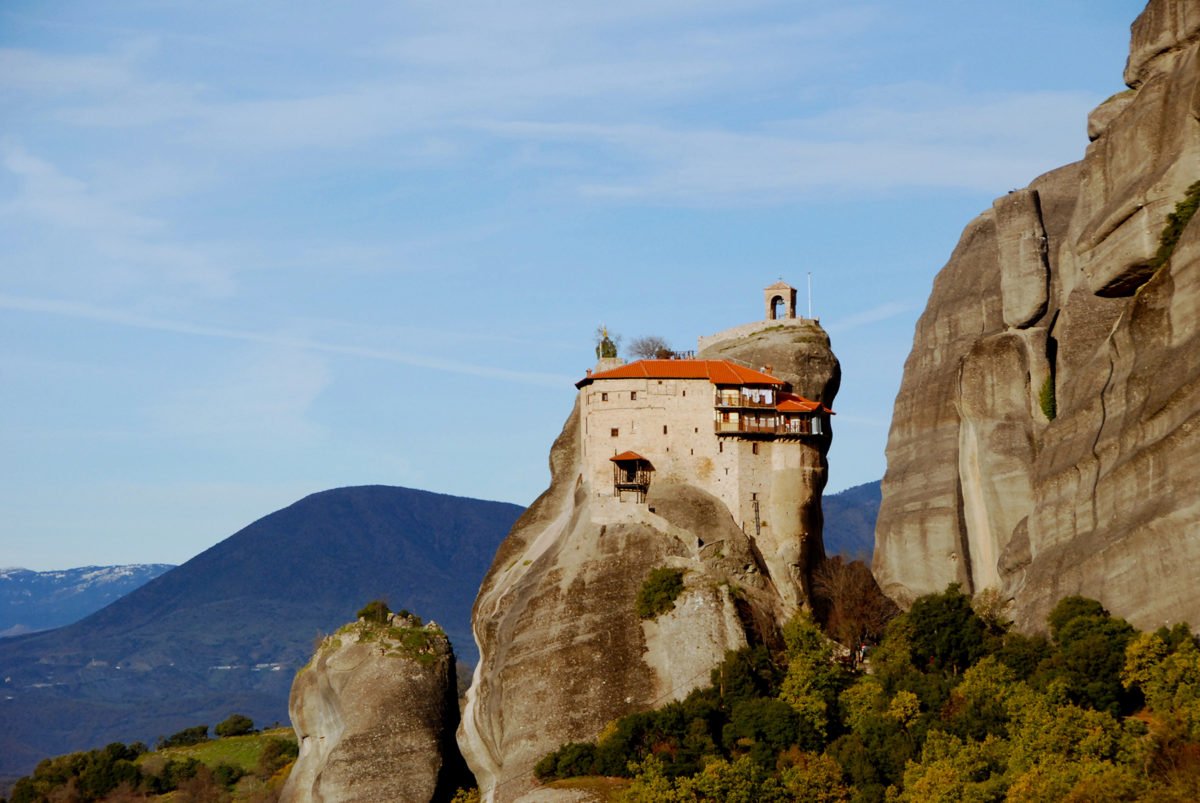 Megalo Meteoro is the most imposing of all in size, in the western part of Meteora, which stands at a height of 613 m above sea level. Its founder was Athanasios the Meteorite, who founded the monastery in the middle of the 14th century. While the second founder is probably the monk Ioasaf. Additionally, it is about the former king John Uresis Paleologos (on his mother’s side he was related to the Byzantine imperial family of the Paleologos), who fled to Megalo Meteoro at the age of about 22. His cart is in the monastery.

It is indeed impressive, quite maximalist from an architectural point of view, and certainly very different from Roussanos Monastery, which is smaller and more compact. Nevertheless, the Great Meteoron has some very interesting exhibition spaces, such as the manuscript museum (where they display everything such as a medieval “tetravangelo” on parchment) or an exhibition of various strange relics. Such as a dragon blade and a medullary, i.e. a part where they put a mixture of bone marrow (!) and fat and used it to polish and clean weapons. The most beautiful thing, however, in Megalo Meteoro is a small room with a small opening, from which, if you stick your head in, you can see shelves full of monks’ skulls. They symbolize the spirit of the dead monks. An explanation making the sight, apart from creepy and riveting, easier to understand. 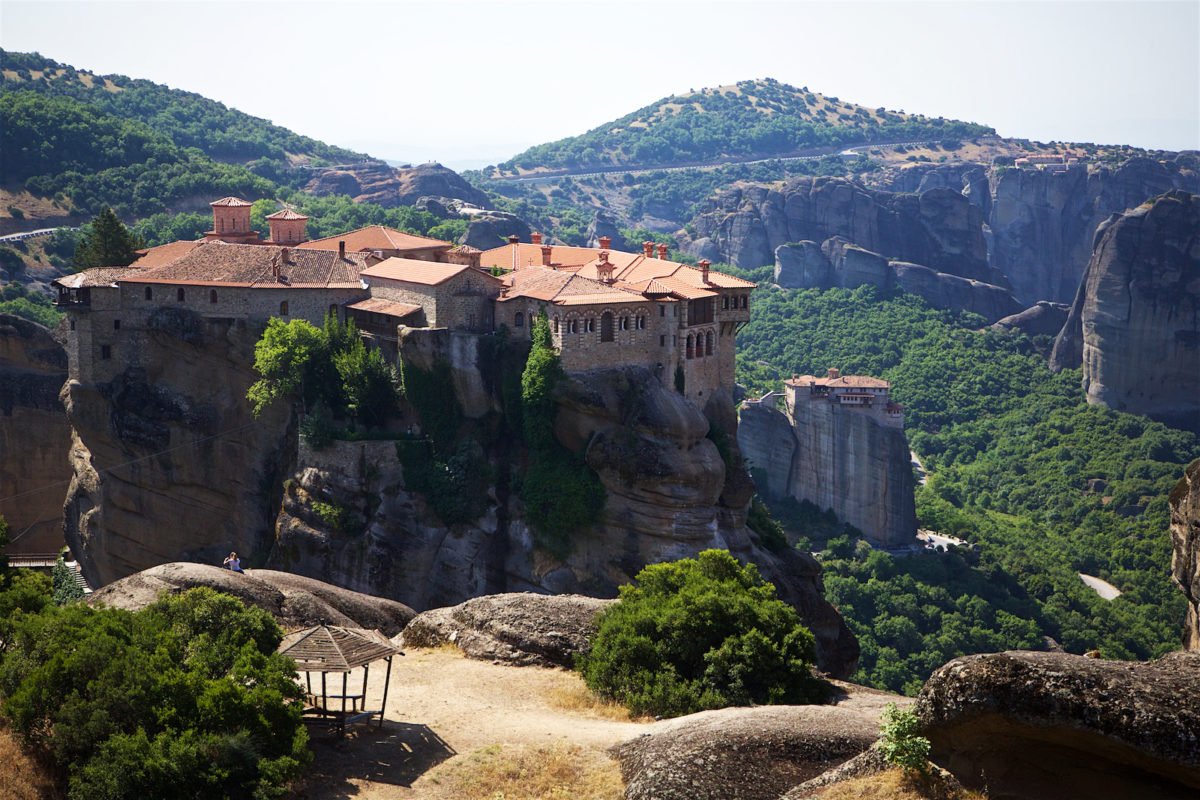 Walk with a View

Two things are good to keep in mind about hiking in Meteora. Basically, to know what not to be afraid of and what to look forward to. Firstly, is that there are short, easy routes that require only one to be willing to walk. Secondly, is to hike through the “stone forest”, crawl like an ant under huge rocks, and have the opportunity to observe from a distance (to have a more complete picture) the monasteries and abandoned hermitages.

The route that starts from Kastraki and ends at the Kalogera Prisons is fantastic. Walking on fallen leaves, which break like chips with every step is so much fun. The hike that passes opposite the monastery of Agios Nikolaos Batova or Kofina is also beautiful. It dates back to the middle of the 14th century and is located in a ravine between Kalambaka and Kastraki. At an altitude of 370 m. viewing the Monastery of Badova from a distance is striking. It is so embedded in the rock, that it looks more like a patch than a structure. Looking at the small building, cut and sewn on the stone, one of the peculiarities of Meteora is that the monasteries and the rocks are not differentiated. On the contrary, they are an indivisible whole.

On the way to Agios Nikolaos Batova, pass under the remarkable, hermitages of Agios Grigorios. Which even your guide has not seen from the inside. The area of Meteora is ideal for walking. We suggest a series of low-difficulty passable routes, suitable for people with little experience. However, there are no markings. Therefore, you must have a map and GPS with you. Or even better to go with a guide. Nonetheless, those of you who are not familiar with hiking will get tired at some points. Therefore, make sure you are properly equipped with shoes, a walking stick, comfortable clothes, and water. Nevertheless, there is no way you will not be compensated by the refreshing walk in the forest.

Degree of difficulty: A. Duration: 30 minutes.

Degree of difficulty: A. Duration: 45 minutes.

Degree of difficulty: A. Duration: One hour.

Contact one of our travel designers, to plan your Meteora Hike at [email protected]