The 5 Most Picturesque Towns and Villages in Mani
[:en]Dragon lakes of Greece[:fr]Lacs du Dragon[:pt]Lagos-dragão da Grécia[:]
[:en]The most beautiful Greek New Year Customs[:]
Peloponnese
“Passing by, you see Mani in 3 days, walking in 3 months, and in order to see its soul, you need 3 lives. One for the sea, one for its mountains and one for its people.”

So wrote Sir Patrick Leigh Fermor, a renowned British travel writer, who lived in and explored the region widely and made Mani famous through his writings as in “Mani Travels in the Southern Peloponnese.”

Mani is the central peninsula of the 3 which extend southward from the Peloponnese in southern Greece, and encompasses the prefectures of Messinia and Laconia.  From the steep foothills of Taygetos Mountain rising to 2407 meters, stretching down from the center of the Peloponnese, with its gorges and hiking trails, down to stone houses built around coastal coves with emerald waters and sandy or pebbly beaches, from fortified villages with stone towers standing guard on hills to olive groves, the region offers dramatic and stunning scenery. It is home to the Maniots who claim direct descent from the ancient Spartans. They have the reputation of being fierce warriors, having fought in the Greek War of Independence,  are proudly independent, and their culture is rich with stories of feuds and piracy. On the north eastern coast of the peninsula, on the Lakonian Gulf, lies Gytheio, the largest and most important town in Mani and seat of the municipality of East Mani.   Built on a hillside around a natural bay, Gytheio, which used to be the port of ancient Sparta, enchants with its pastel colored neo- classical buildings, long esplanade with its restaurants, cafes and shops along the sea front. North of the city lies the ancient amphitheater, built in the 1st century AD. On the south side of the town, the road leads to the small islet of Kranae which is now connected by a causeway. Legend has it that Paris and Helen of Troy stayed here on their way to Troy. On the island, you can visit the Maritime Museum, housed in the Lighthouse built in 1873, and the Historical and Ethnological Museum of Mani in the Tzanetakis Tower, built in 1829. For swimming, Gytheio’s most popular and largest beach is Mavrovouni, 2 km south of the town. It is 6 km of sandy beach where the protected Caretta Caretta sea turtle come to lay their eggs. The sandy Valtaki beach nearby is the site of the Dimitrios shipwreck, a cargo ship stranded there since 1981. Gytheio has a regular ferry line to the island of Kythira and can be a starting base to explore Monemvasia, Mystras and the other towns and villages of Mani. On the northwestern coast of the peninsula, is the village of Kardamyli. It has been referred to as the Green Treasure town of Mani and is one of the oldest settlements in the Peloponnese. Set against the backdrop of Mount Taygetos, wild olive groves, green hills and cypress trees, and overlooking the blue waters of the Messinian Gulf, this seaside village is one of the most picturesque and popular destinations of both Greeks and foreign visitors. In the old town or Pano Kardamyli, you find the Troupakis-Moutzinos fortified complex of buildings that includes the 18th century Church of Agios Spyridon and the restored 3-storey residence that is now a museum. Kardamyli is the departure point of many mountain trails, some of which lead to the top of Mount Taygetos. Of particular interest is the 20 km long Viros Gorge. Just outside Kardamyli is the village of Kalamitsi where the writer Patrick Leigh Fermor made his home. The coastline around Kardamyli has beaches with smooth round stones, unique to the area. Ritsa is an organized beach with white pebbles, Foneas has deep waters, small caves and canteen, while Kalamitsi with its cypress trees and shallow waters is ideal for children. 10 kilometers further south is Stoupa, another favorite vacation spot, with its sandy beaches, facilities and tavernas. As you continue your drive down south, be sure to make a stop at the remote village of Traxila with its stone houses built around a stony harbor.

Secluded Oitylo Bay, in the prefecture of Laconia, encompasses the 3 seaside settlements of Limeni, Neo Oitylo and Karavostasi.  The town of Oitylo,  built on a high promontory overlooking the Bay of Oitylo and the large fortress of Kelefa built in 1679 by the Ottomans, has been continually inhabited since antiquity. Nearby are the two monasteries of Dekoulo founded in the 16th century and Tsingou.  Limeni, once a pirate cove and old harbor of Areopoli,, is a pretty little sea-side village with traditional stone houses, taverns, cafes and hotels. The restored 18th century Mavromichalis Towerhouse looking over the harbor with its fishing boats provides accommodation. Neo Oitylo in the middle of the Bay is built around an impressive sandy beach 2 km long. Karavostasi, the harbor of Oitylo, is a holiday resort with sandy beaches. Areopoli or the city of Ares (the God of War), situated on a hill above the harbor of Limeni, is one of the larger towns of Mani and one most visited by tourists. Every Saturday there is a lively open market in the main square where local produce is sold. Sigklino, a salt cured pork which is smoked and boiled with olive oil and oranges and Lalagia or fried dough strips are some of the local specialities. You might also want to try the roasted suckling pig, sausages and kagianas which is a dish of fried eggs with tomato and cheese at one of the many tavernas in the square. Areopolis is a well preserved historical town with its narrow alleys and cobbled streets and traditional stone tower houses. It is the city where the first flag of the Greek Revolution was raised on the 17th of March 1821 by Petros Mavromichalis. The white flag with a blue cross had the revolutionary motto, “Victory or Death” and the old Spartan motto “With your shield or on it”, denoting victory or death. This historical flag is on exhibit at the National Historical Museum in Athens. Landmarks of the city include the Taxiarchis Church with its impressive 5-storey bell tower on 17th of March square, built in 1798, with the restored tower of hotel Tsimova next to it. The statue of the last Bey of Mani Petros Mavromichalis stands on the square of the Immortals. The Byzantine Museum of Areopolis is housed in the Pikoulaki Tower and features Byzantine pieces and icons from churches in Mani. 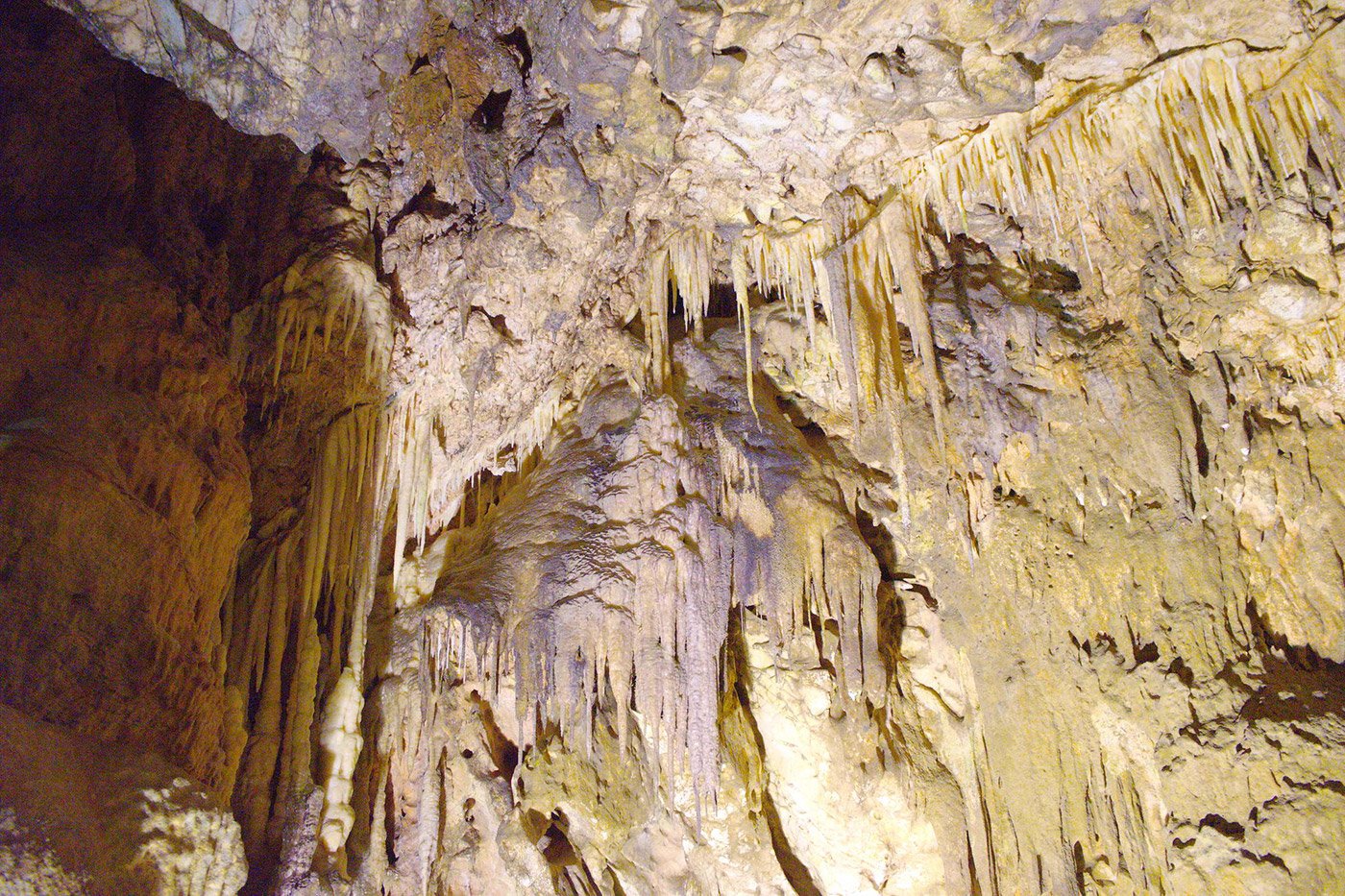 A short distance from Areopolis lie the Caves of Diros. The 3 caves can be seen by boat where beautiful shapes formed by the stalactites and stalagmites offer a unique spectacle. The boat ride covers 1200 meters and the final 300 meters to the exit are made on foot.

Gerolimenas a small, quiet village with a fishing port used to be an important harbor in the past, sending local goods to Piraeus and Syros island. Today, it offers a peaceful alternative with its small sheltered pebbly beach, fish taverns, hotels and cafes. With its picturesque old stone houses, fishing boats and clear blue sea, it is widely visited throughout the year. There are two important medieval towers that have been turned into hotel complexes.