Although Greece is mainly famous for its beautiful islands and award-winning beaches that travelers visit during the summer, we want to give you an alternative idea on how to spend a Greek winter vacation. Greece is an all-year-round destination, that covers and exceeds your most demanding expectations. Therefore, we present our top five lakes scattered all over this magnificent country that will make your holidays unforgettable. In the 1930s, Nikolaos Plastiras envisioned the construction of a dam that would provide a solution to the problem of the irrigation of the Thessalian plain, to the water supply of Karditsa, but also the production of electricity by exploiting the power of water. Of course, it took many years to complete the dam, around 1959. 62 years ago, at an altitude of 800 meters, the waters of the river Tavropos were “trapped” in a lake, and then nature worked its magic! Today, the lake is naturally integrated into the environment, it looks like it has always been there.

Lake Plastira is a place where everyone will have a good time. Couples and families enjoy nature walks among firs, oaks, plane trees. But also, they sip on their steaming cups of coffee in their hotel rooms that overlook the imposing green-blue landscape. For nature lovers, Lake Plastira is their scene! They can go hiking, cycling, and on off–road adventures with a 4×4 vehicle. 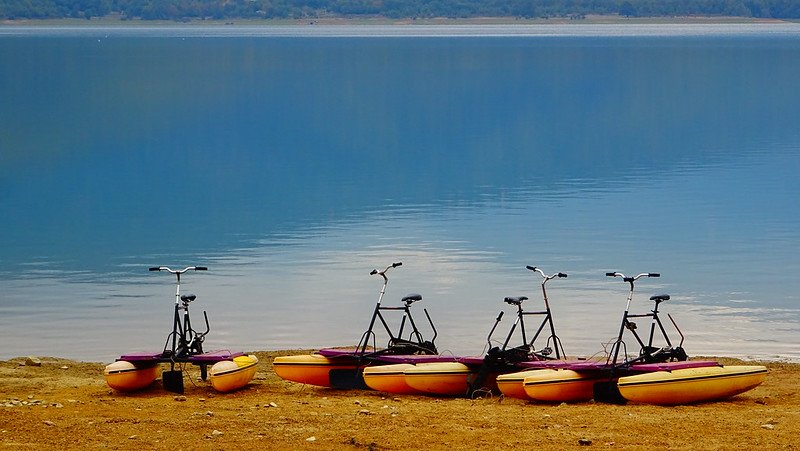 Walking around the lake on foot is a “cinematic” route. The beauties of the forest and the steep openings overlooking the fjords of the lake will captivate you. With a little luck, you may see some of the animals in the area such as foxes, wolves, wild boars, and deer. Sports lovers can find several activities to do like horseback riding, rowing, archery, and even fishing are available for one to enjoy!

Finally, foodies can enjoy the delicacies of the Thessalian cuisine in the taverns in the surrounding villages full of delicious treasures. Try onions stuffed with minced meat, pine nuts, and raisins. Or fava with smoked trout and yogurt or wild boar with plums and chestnuts. For dessert try the orange pie or apples baked with yogurt. 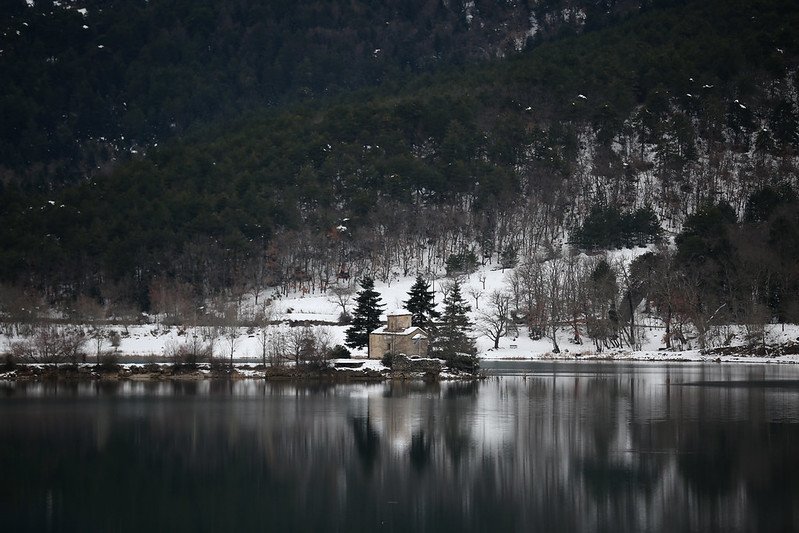 Within two hours from Athens, you will find yourself in a place of special beauty. Near the village of Feneos in Corinth, at an altitude of 900 meters, lays one of the most gorgeous lakes in the Peloponnese. The stunning artificial Lake Doxa is surrounded by lush black pines that reach the shores and the scenery looks like it has sprung from a painting. In the late 1990s its construction ended.

In the center of the lake stretches a narrow peninsula, where there is a small, picturesque church of Saint Fanourios, while higher, on a slope at about 2 km, is the historic monastery of Saint Georgios Feneos of the 15th century. There, you can taste the famous rose sweet that the monks make. Enjoy the unique view of the lade from a wooden covered balcony. The wider area of Doxa and Feneos is ideal for nature-lovers as there are plenty of outdoor activities to enjoy such as hiking trails, mountain, and water biking. Also, many camping lovers camp on the shores of the lake and enjoy the tranquility of nature. 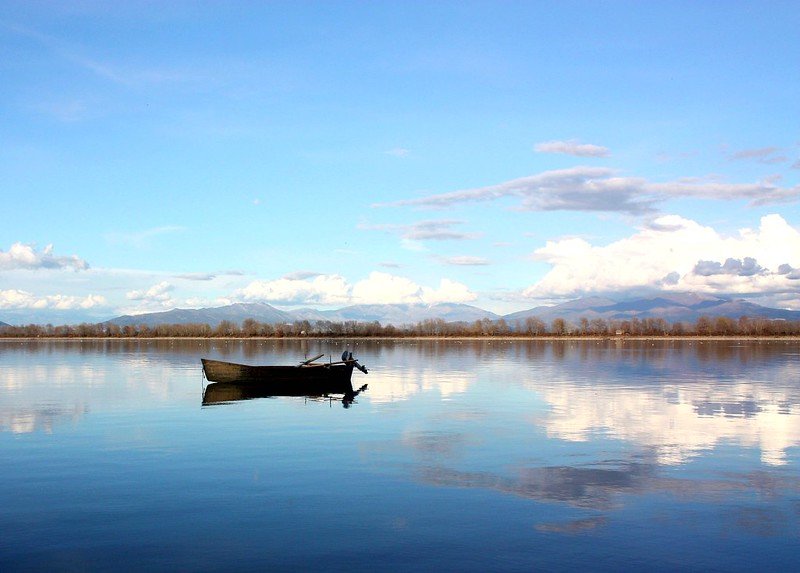 Just 40km from the city of Serres, you will find Lake Kerkini, one of the most spectacular places in Greece. The area has been declared a National Park per the international Ramsar Convention. Lake Kerkini was created in 1932, when the dam was built around Lithotopos, to hold the waters of the river Strymon. Later, they used it as a water storage place for the irrigation of the plain of the prefecture. In 1982, due to the reduction of the lake’s capacity due to sediments from Strymon, a new dam was built.

Today, Lake Kerkini is a huge environmental project that has given life to a variety of birds and mammals. Lake Kerkini has rich vegetation with the most characteristic elements being the water lilies that are mainly found at its northwestern ends. There, also extends the riparian forest, a feeding and nesting area for many rare birds. 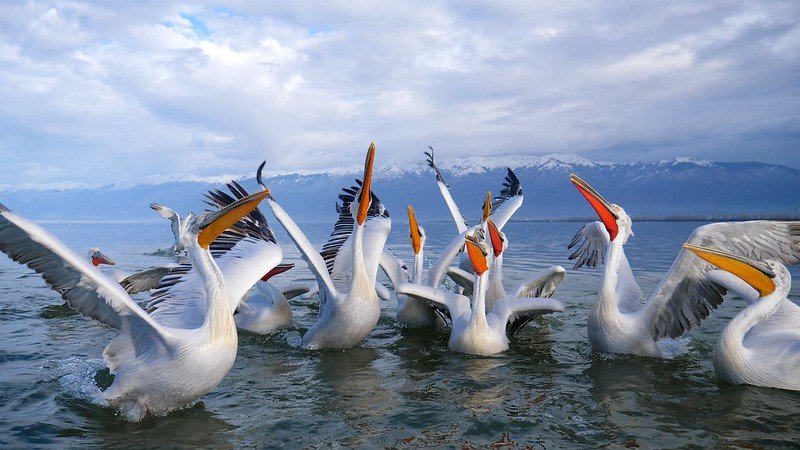 Activities around the Lake

It is a source of life for both the fauna of the area and economic development. There are dozens of hotels in the region with the most modern amenities as well as traditional taverns with local specialties. In the surrounding area, there are also facilities for archery and paintball. Additionally, you can go hiking, cycling, horseback riding on the various trails in the area. 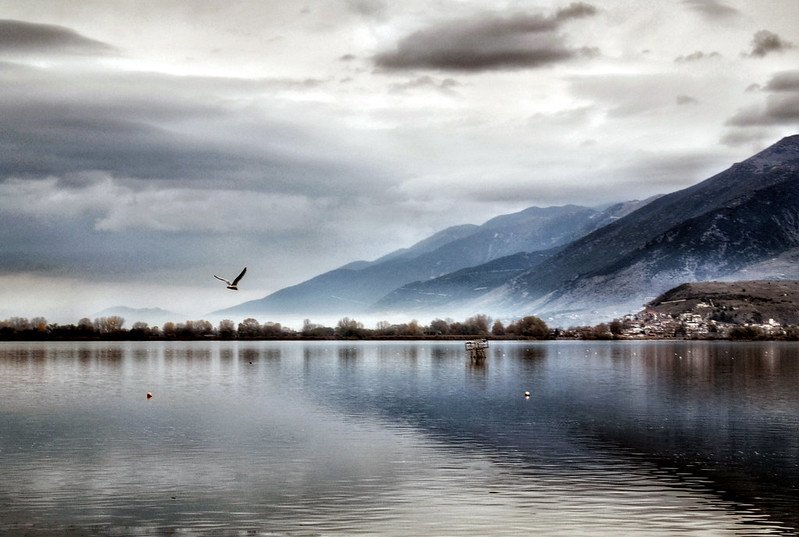 The Lake Pamvotida is one of the most famous attractions of Ioannina and the second oldest lake in Europe. The history of the lake begins 3500 years ago. During the years of slavery, monks found refuge in the peace of this place. The island of the lake experienced a period of prosperity in the 13th century, when the Despotate of Epirus was founded and a total of 6 monasteries were built, making it the stronghold of the Byzantine monastic life.

Its decline and desolation came when Ali Pasha intruded on the property of the monasteries and imposed heavy taxes on the inhabitants. With the fall of Ali, the citizens returned, and until today Pamvotida together with its island is considered the jewel of the city!

The small island in the lake is one of the two lake islands of Greece with inhabitants. However, it is the only one in the world without a name! To visit the island, embark on one of the boats, and in just 6 minutes you will step into a world that seems to have been forgotten by time. Shops with local products, but also taverns that serve lake fish are what you will find. The Lake Kournas is the only natural lake on an island in the Mediterranean. It is the southernmost lake on the European continent. Furthermore, the lake was created by the obstruction of the groundwater, which descends from the volume of the White Mountains. The level of the lake varies with the season. Until spring the level is at the lowest due to the reduction of the volume of the groundwater from the mountains. In summer, the level rises due to the melting of the snow from the White Mountains.

Kournas lake has been mentioned since ancient times as Korisia. In fact, legend says that there was a sanctuary on the banks in honor of Athena Korisia. In Arabic, the word Kourna means bath and lake. It is possible that the Arabs renamed it from Korisia to Kourna. The dark waters of the lake create the illusion that the lake is bottomless.

The myth behind the lake Kournas is that there was a village in place of the lake. One day a villager took his daughter to the fields. On the street, they sat down to rest and the girl started combing her blonde hair. Her father initially was proud of his daughter’s beauty, he then suddenly ran up to her and threw himself at her. The girl in her despair these words “Voula and Voulolimna! I am the element in the lake!” Immediately the place sank and turned into a lake. The locals believed that those who have a “light shadow” (people who see ghosts) can see a blonde girl sitting on a rock in the middle of the lake brushing her golden blonde hair.

Create your Lake Vacation in Greece